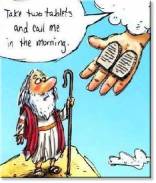 Divine tablets. Right there. Up close and personal. I’ll bet Moses didn’t have any trouble figuring out that God speaks.   The Voice from Heaven commanded his attention. He got the message loud and clear.

God used angels with Mary and visions with the Apostle Paul. Samuel, Isaiah and Elijah each heard a voice in a dream. So did Daniel, and Ezekiel, and the Apostle John.

Job listened carefully as a still, small Voice of the Presence of God ministered to him in the midst of trial. David enjoyed that Voice while communing with nature.

Many people choose to believe that God communicates in special ways and only with special people, but I don’t believe it.

And every common bush afire with God;

But only he who sees, takes off his shoes,

The rest sit round it and pluck blackberries,

And daub their natural faces unaware.

I have ‘taken off my shoes’ at a ‘common bush afire with God’.  Yes, I have.  More than once.  Let me tell you a true story.

Our first days in Russia filled with drama: witnessing the parliamentary takeover attempt in Moscow live from our hotel room, enduring a 54-hour Trans-Siberian train ride to Novosibirsk, and, then, setting up a temporary home in a small flat before our permanent residence became available.

During this ‘interior camping’ experience, our seventh day in Russia, Andre fell into a four-foot cement window well in the dark on his way back to our flat after taking out the trash.

He somehow managed to get out of the window well and stumble back to the apartment building, climb five flights of stairs, and collapse in front of our apartment door.

All he said was, “Call an ambulance.”

At that time, I spoke no Russian and I didn’t know anything about Russian ambulances, hospitals, diagnostic equipment, or doctors.

I did know how to call our Russian friend, Tatyanna, who called the ambulance and who rode with Andre to the Siberian hospital that dark night. They wouldn’t let me ride along, so I left the kids in the care of another friend and took off for the hospital.

I didn’t have a car and barely knew how to navigate my way to the bus stop, but I did both, paid the fare and found a place to stand near the front left side.

My mind was as foggy as the frosty window I gazed through. Myriads of shocking questions and unknowns crowded together becoming restless and uneasy as my body relentlessly squished itself between two large babushkas, all of us jerking awkwardly toward somewhere with every bumpy turn of that slowly moving bus.

At that moment, I didn’t know how serious Andre’s injuries were.

I did know that he thought he’d probably broken at least four ribs and that he was quite sure he had a punctured lung and maybe other internal bleeding and injuries; so I also knew that I needed to prepare myself mentally.

Maybe he would die?

I prayed to God for a Promise and a Hope.

Our town was carved out of huge, dense evergreen forests. This is the forest primeval, I thought, pondering numerous, heavy thoughts. They weren’t about Longfellow’s Evangeline.

As I watched the deep, dark trees and paths drift by, Robert Frost’s words from Stopping By Woods On A Snowy Evening came to my mind.

I quoted them to myself from the beginning to the end.

The woods are lovely, dark and deep.

But I have promises to keep,

And miles to go before I sleep,

And miles to go before I sleep.

God told me thru Robert that Andre would be all right.

And indeed he was. 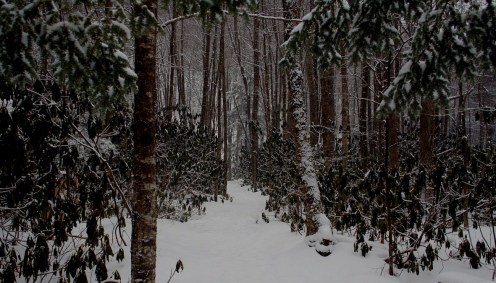 This entry was posted in Reflections, Stories. Bookmark the permalink.