Light a Candle for Hope!

During the Advent season many of us wrestle with mixed emotions—the warm fuzzies that accompany Christmas decorating, cookie baking, parties, gift giving. Yet, surprisingly, there’s haunting melancholy in the mix. This season reminds us painfully of areas in our own lives in which we are waiting or longing for some kind of healing.

A Light in the darkness. A candle for hope.

In the last three years I’ve received unwelcome gifts accompanying Parkinson’s disease. Last winter I came near death with the downward spiral of untreated symptoms and found myself at the Mayo Clinic on Christmas Eve 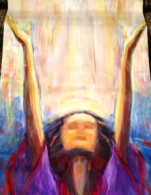 day. It was on that day, December 24, 2013, that I received the definite Parkinson’s diagnosis and with the ensuing treatments prescribed and in place I began to improve. My new friends include two pills every four hours 24/7/365 to keep the tremors and spasticity at bay, a cane, walker, and, on occasion, a wheelchair.

In this process our church healing services have provided the sacred space for my healing to begin. At first I didn’t know what to expect.

Maybe I would take up my proverbial bed and walk right then and there.  Maybe, like Paul, I would pray three times for the thorn to go away and God would say “No”.  Maybe I would have to die first, like Lazarus, be dead three days, and then rise.

All I knew was that I was broken. I still looked pretty good on the outside, but in my Pleasantville of denial nothing was pleasant inside. I was not coping with the flood of frightening changes. Even though I was under the care of some of the world’s best doctors, I knew they were powerless to perform miracles. I was in pain physically and spiritually and I was drowning on the brink beyond hope.

So at the first service I attended, when the leader, Cheryl, asked Jesus’ question—-“Do you want to be healed?” it almost made me angry.

At first instinct, I thought, of course, I do. Who wouldn’t? Especially me!

At second thought, the question gave me pause to ponder the depth of the implications. I began to see the light of glorious change dawning in the dim distant horizon of my troubled mind but I knew it would cost me. 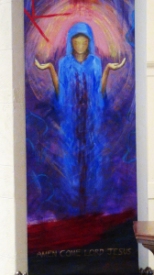 ld cost me my pride. My denial. My self-bartering. It would demand taking a good look in the mirror and facing my harsh realities head on. It would also demand asking and receiving and listening.

Nevertheless, that night I decided to get out of the boat.

I stepped into the deep water and, wonder of wonders, I started to walk.

He steadies me in the waves and storms and gives me Light in my Darkness.

Light a candle for Hope!

*Images courtesy of Church of the Cross, Hopkins, Minnesota.

This entry was posted in Reflections, Stories. Bookmark the permalink.